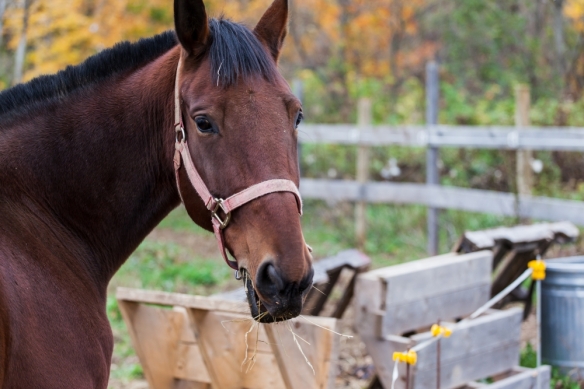 So, the day I had the Jimmy and my camera and I was a god, I went to a place to take pictures of a lighthouse in HDR but didn’t like them. Also took pics of some horses in a corral beside the lighthouse, but given that the HDR needed three exposures blended into one image and the horses knew this and wouldn’t keep still long enough for me to get three shots that didn’t have them three feet apart practicing camera avoidance tactics like line dancing and rhumba, I didn’t get the three exposures I needed.

All I had was horse smudge.

So I said to myself, “Biff, you’ve never been a quitter. Don’t let these horses get away with this. Go back there, park a mile away from the corral, put on your camouflage shit, crawl on your belly up to the corral, hide in the bushes and get your horse shots.”

Which I did, but the horses weren’t there. So I did it again and the horses still weren’t there. After several more attempts, I knew what was going on…they were practicing Biff avoidance tactics. So I didn’t get my picture, but, man, can I crawl on my belly.

Decided on one last try. Today. And they were n the corral and didn’t see me up in a tree by the road disguised as a tree turkey. With a camera.

One of them said, “I think that bald photographer guy’s back. Should we eat him or dance?”

The other horse glanced up (as shown here) and said, “Naw. That’s just another damn tree turkey with a camera. But I wouldn’t mind a little dancing.”

And they started line dancing, very gracefully, in fact.

I knew I had my shot, so I shimmied down the tree, walked into the middle of the road, tore off my tree turkey disguise and shouted, “Ha ha, horses. Got my picture!”

Did my fastest one minute mile ever…but I got the shot.