Somehow my daughter, Cass, and I survived the second day in Veradero. I’m not sure how. We should have perished in a flood of rum, beer and Spanish coffee…not to mention that I was suffering from a bad case of flu. Fucking flu. Got it a week before leaving for Cuba, but I wasn’t going to let it get me down. Sun and rum. Doesn’t do a thing to clear the flu but it sure as hell does a lot to bury the symptoms so deep that you know it’s somebody else doing all the coughing and you might even advise them to spend a little time in the sack instead of spreading that shit all over the Veradero landscape. I call it alternative treatment of the fucking flu.

But we survived the second day and woke up Easter Monday to Enya playing softly but loudly over the pool area. I turned over in my bed and heard a sloshing sound. I turned some more and heard more sloshing. More turns, more sloshing. I called out to Cass in the next bed, “Cass! Wake up! Tell me…am I sloshing? “

“Are you awake? I think I have a problem.”

So I was sloshing. But could I be sure of that? I’m not sure how much I trusted where the second opinion was coming from. I didn’t think it came from a place of informed wakefulness. So I sat up. It was like sitting Rum Sloshing Blues.

Only one way to cure the Rum Sloshing Blues…fall back into the bed and go back to sleep. Which I did.

We missed breakfast. Again. But the 24 hour bar was still open (in fact, it seemed to always be open), so we started the day right: Spanish coffee. We walked around for a while talking about this and that, mostly that…and came across the pool bar where we acquired that most precious of pool food…the toasted ham and cheese sandwich…also the perfect companion to Spanish coffee.

After staring around at life in paradise, we decided it was time to head to the mall to get stuff we had on a mental list somewhere in one of our heads. We knew this would become clear to us once we arrived at the Plaza del America. We went back to the room to change into our mall clothing.

We had no idea what horrors were awaiting us in that room.

The maids in Veradero have this custom when they make your bed and do something creative with the towels. We’d experienced this last year and it was kind of cool.

But this year was different.

The first thing we saw was a mesmerizing blue towel that began to spin as soon as we looked at it. This was new to us. It wasn’t in any of the guide books that we hadn’t read and it was nowhere in any of the histories of Cuba that the tour guides from last year had described to us in intimate detail. This was new and probably not really a good thing. 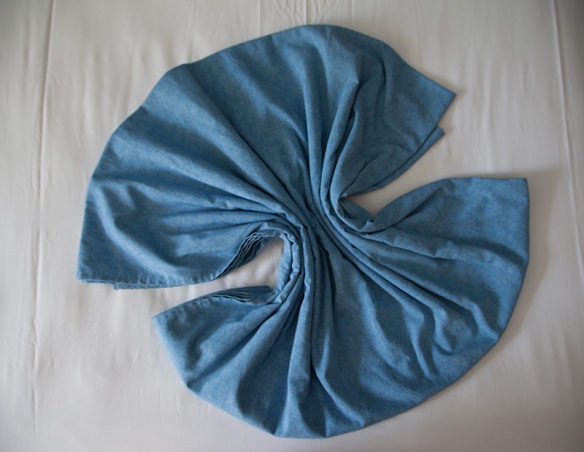 The towel spun faster and faster as Cass and I stood before it, shoulders bent forward, arms dangling in front of us. I kept thinking, What happened to our rum punches? Did we bring the rum punches with us? Did we leave our rum punches by the pool? I could sure do with a rum punch right now.

The towel lifted off the bed and flew out the balcony door in a flurry of blue terry cloth, crashed into a cluster of coconuts and bounced into the sky through an umbrella of palm leaves. Yeah, a rum punch would have been nice around this time, but Cass and I were still bent over in the hall (and I’m sure she was wondering where her rum punch was as well) when things started to get even weirder.

The beds were alive with all manner of towel and blanket swans. And they were talking.

“Hey, gringos, where’s our rum punch?” said two swan blankets simultaneously as they pressed their heads together into a heart shape.

“Si, hueleos, we want rum punch,” said two more swans, these ones towels, making the same heart shape, but there was anything but heart in their malevolent tone.

Well…let me tell you…when you’re faced with talking swan towels and blankets wanting rum punch, all you can think of is…where did those damn rum punches go?

“Where did those damn rum punches go?”

“I think we drank them, Sweetie.”

“Dad…is our bedding really talking to us?”

“Rum punch, gringos, rum punch,” yelled a swan blanket wearing one of my daughter’s hats , as it jumped up and down on the bed.

“Rum punch! Rum punch!” yelled another swan blanket, wearing one of daughter’s other hats. And it started jumping up and down on the bed. 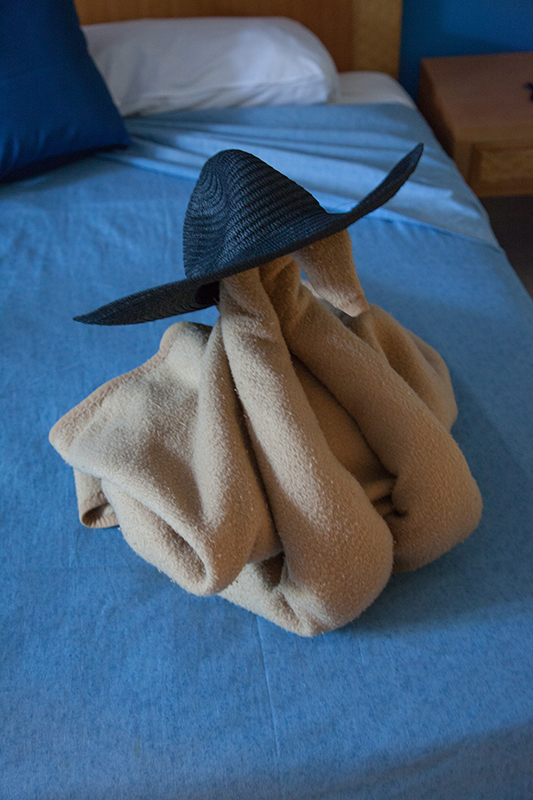 One of them jumped right off the bed and into my face. “Rum punch, guacho. Rum punch,” it hollered.

Suddenly we were surrounded by towels and blankets screaming for rum punch. They were everywhere, hanging from the ceiling, bouncing on the floor and the beds, flapping crazily round our heads…

We couldn’t take it anymore. We ran right through them and out the balcony door, sliding it shut with a loud slam as a mess of blankets and towels and hats piled into the door.

“Maybe we should just sit here and wait a while,” I said.

Cass nodded agreement and we sat, staring out at the palms and blue sky, with the sound of blanket and towel art beating madly against the balcony door. We looked at each other for a moment, smiled, and dozed off.

We woke up a while later. It was sunny, warm and…well…tropical. I looked at the table about the same time Cass did…and wonder of wonders…there were our rum punches in large wooden mugs. We looked at each other with mutual realization…we’d both fallen asleep and had the same nightmre.

Just a crazy little dream. We were OK and we had our rum punches.

“Ha ha,” said Cass. “Don’t get et by talking towels on your way to the washroom, Dad.”

I stood up and turned towards the balcony door. Pushed up against the door was a pile of blankets and towels and hats.