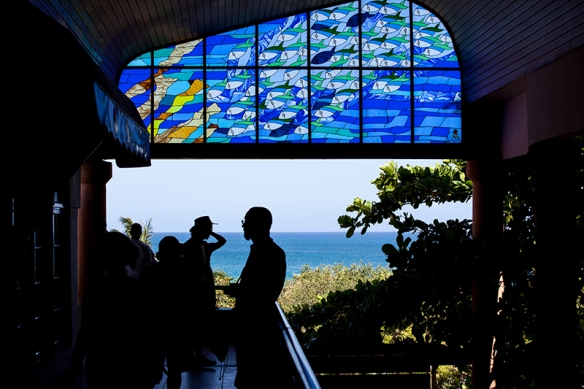 There comes a time when every man and his daughter must go to the mall. After a second round of Spanish coffee, Cass and I decided that time had come, so we hopped into a cab…an old Pontiac, pristine inside and out and driven by a crazy guy who sang to music blaring from the dashboard speakers about some guy who was more in love with his car than with his wife and he sang “loco” repeatedly as he turned back and forth between Cass and I as though he were bringing us to some great understanding of how a man can love his car more than his wife but he would still have to be kind of loco to do that. This is the driver…giving me the thumbs up while he sang “Loco! Loco! Loco!”

I couldn’t help but wonder if he were the man in the song. Was this man more in love with his car, beautiful as it was, than with his wife? Was he loco? How did his wife feel about this? Was she jealous? Would she go for Sunday rides with her husband in this car that had displaced her as the number one love in his life? Did she want to kill her husband’s car? Humiliate it in public by flattening all four tires? Take a key to the immaculately maintained body? Was our driver sane enough to be driving us to the mall?

This is Cass in the back seat wondering if it would be safer to jump out the window than stay in the cab:

Fortunately, it was a short drive to Plaza America, the mall.

What I love third most about this mall is that it’s not like every mall in Canada spreading from the Atlantic to the Pacific in Canada with the same chain stores carrying the same stuff from sea to shining sea.

“Hey, Joe, look at the amazing shirt I bought at the mall in Toronto.”

“Biff, you have impeccable taste in shirts…it’s the same shirt I bought at the West Edmonton Mall.” 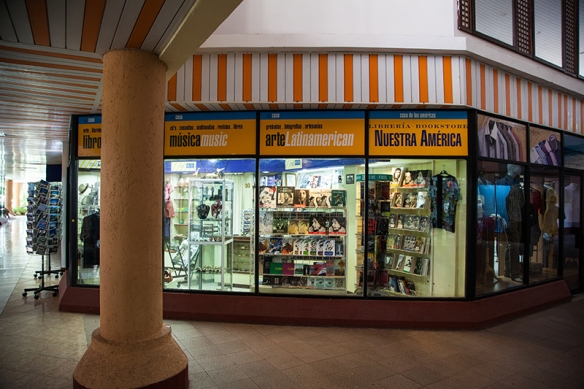 Plaza America is the great Veradero father/daughter escape from sameness.

“Hey, Joe…look at the shirt I bought at Plaza America in Veradero.”

This mall has everything and then some…like a courtyard with open sky and a porta-bar where you can buy Cristal beers in cans or bottles and chill out under an umbrella while a makeshift troupe of musicians plays not-so-bad salsa. And everywhere…palm trees and lizards.

One bold lizard jumped onto our table and said, “Hey Gringo…take my picture for a peso?” So I gave the scaly little guy a peso and took his picture and he went to the bar and bought a Cristal. He brought is beer to our table and regaled us with stories of what it’s like to be a lizard living in a mall. Can’t say I remember any of those stories but this lizard knew his mall…and loved his beer. So, we sat with the lizard for a while before venturing off into the mall, going directly to a bar we’d visited the year before. We acquired a couple of cans of Cristal and chilled on the patio with this view:

Actually, I meant this view….

A couple birds that we called Cuban sparrows because they looked like sparrows landed on the patio wall and said they would pose for a peso so I gave them each a peso and took their picture.

They, of course, used the money to buy a couple of Cristals and sat together at the far end of the patio drinking their beers and enjoying the view.

After a while, we decided it was time to venture back into the mall and maybe even do some shopping. First stop was the cigar store where some guy from France was making the lone clerk open boxes of cigars so that he could sniff them and feel them up. This guy was crazier than the driver. What he was doing to those cigars was unnatural. I wondered if he loved cigars more than his wife. Maybe he married to a cigar. I wondered if his cigar wife was at home, suspicious about where he was, what he might be doing to strange cigars. A line of increasingly impatient shoppers stood behind with weirdo from France, watching the weirdness and wanting to cut his hands off and cauterize his nose. We’d already seen, in Havana, how violent cigar lovers can suddenly turn.

We left before the riot started. We headed back to the courtyard…where something strange was happening. I saw a bronze statue of a woman hanging on to a piece of wood wrapped in philodendron leaves, the rest of her body floating in the air. Across from her was a bronze statue of a man holding a metal ring with a bronze woman floating in it. The statues were so lifelike you would almost expect them to wink at you. I focused on the woman floating in front of me and, just as I was about to release the shutter, the bronze statue winked at me. I lowered the camera and stared at the statue. It winked again. She was real. So were the man and the woman in the ring. 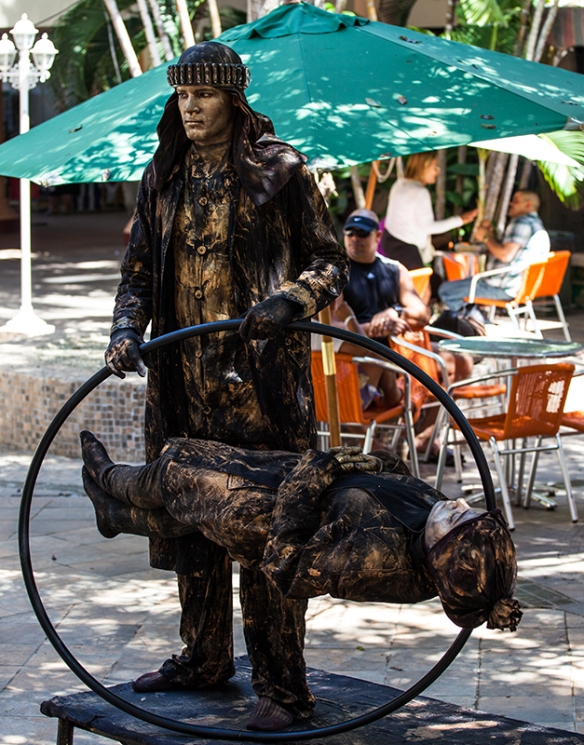 This was one of the most amazing things I’d ever seen. Every few minutes, the statues would move very slightly, just enough to make passers-by stop in their tracks and say things like “ooo” and “ahhh.” Some fainted from shock. Others ran screaming from the courtyard. Some just stood, transfixed, wondering what was keeping the floating human statues from plunging into courtyard tiles.

After taking 50,000 pictures and leaving behind some pesos, Cass and I headed upstairs for her annual shot with Che…

…plus the wall pose… 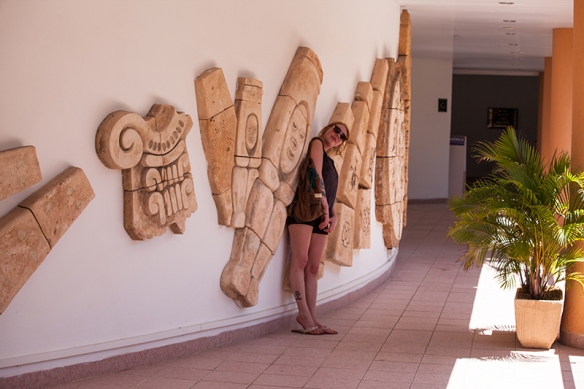 …and back to the patio for some more Cristal. I don’t recall actually shopping for anything.

And now for some totally gratuitous mall pictures.